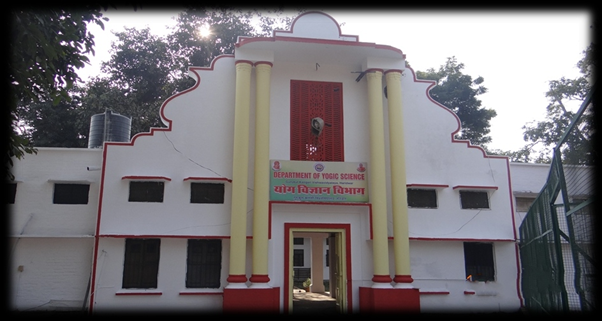 Yoga – the ancient culture & heritage has been well recognized all over the world for its origin, traditional life style, therapeutic & spiritual values. Our hon’ble Prime Minister – Shri Narendra Modi Ji had got its recognition in United Nation in 2015 and 21st June of every year as International Yoga Day. Recently UNESCO has declared Yoga as Intangible Cultural heritage of World at Adis Ababa- Ethiopia.

The department has performed excellently to achieve the goal of propagation of ancient Indian yogic science among newly aspiring young generation of India for healthful utility in India and abroad. 42 students completed their research work and got Ph.D. degree till date. The department has been actively engaged in popularizing and spreading the knowledge of Yoga by sending its students to work in various cities of India and abroad, viz. U.S.A, Mauritius, Dubai, Thailand, Indonesia, UK, Malaysia, South Korea, Japan, Russia, and China etc.. The Dept. has also been spreading its wings for Yoga training programs to propagate Yogic Culture of India by signing MOUs with various Yoga institutions at abroad like China, Spain etc.

Presently, Dr. S.K. Tyagi, (Associate Professor and Head), Dr. Rakesh Giri, (Professor) and Dr. Udham Singh (Assistant Professor) are senior faculty members to fulfill the teaching needs. In addition to this, three posts of yoga instructors are in existence to cater the need of practical aspects of Yoga. Dr. Yogeshwar Dutt, Dr. Rajeev Sharma and Dr. Nishkarsh Sharma are working against these posts. There are four visiting faculty members for teaching needs of the students.

History of the Department

Gurukula Kangri (Deemed to be University) was founded on March 4, 1902 by Swami Shraddhanandaji with the sole aim to revive the ancient Indian Gurukula System of education, on the bank of river Ganges near Haridwar. This institution was established with the objective of providing an indigenous alternative to Lord Macaulay’s education policy by imparting education in the areas of Vedic Literature, Indian Philosophy, Yogic Science, Indian Culture, Modern Sciences and Research. The university has adopted and promoted Yoga as a daily life style, value education and traditional culture for all its students in its Gurukula education system since its existence in 1902.

In 1984, another milestone was erected in the Faculty of Oriental studies by establishing the Department of Yoga to propagate the ancient Indian culture and science in India and abroad. The department of Yoga came in to existence in 1984 by the starting of 4 months Diploma in Yoga under the expert guidance of Dr. Ishwar Bhardwaj. Later on, this diploma course has upgraded to one year PG Diploma in Yoga in 1988. This was an important progressive step in the field of oriental studies of this university. Yoga department of this university has been a premier institution to start with Yoga as elective subject at graduation level in 1990; MA/M.Sc. in Yoga in 1992 and Ph.D. program in Yoga in 1996 in India & abroad. In order to strengthen this department, the proposal of setting up of the Dept. of Human Consciousness and Yogic Science was sent to UGC and got approval vide UGC letter no. F-16/2001(PES) dated 29th March, 2001 and department was established as Human Consciousness and Yogic Science in 2002. Presently the name of department has been changed from department of Human Consciousness and Yogic Science to Department of Yogic Science wide UGC approval Letter No MI.S.8-6/2018 (DU) dated 1 Feb, 2019.

Mission
Faculty Members of the department

Yoga education has been providing to the students by taking consideration yoga as a ancient cultural heritage and thus old Gurukula education system is being observed. The yoga practical training is being provided as per description in ancient yogic text. The theoretical portion is being conducted with a scientific and modern approach to the ancient inherited knowledge of yoga.